In his simple but heart-wrenching short story A Simple Heart, Gustave Flaubert portrays a simple woman, with a big heart devoted to the service of her mistress for the majority of her life. The tale, simple on the surface, has deep messages for the reader inside

The story opens with an insight into the working life of Félicité, a maid employed by Madame Aubain, a not-so-easy-to-get-along-with widow.

Her service to Madame Aubain and her two kids, a girl Virginie and a boy Paul, has been nothing short of exceptional. So much so, that people intend to steal her from Madame Aubain.

The story moves to Félicité’s past where the reader comes to know of hardships in her past – being orphaned early on, working as a servant – being tortured and beaten, and in her youth, having her heart broken by a young man Théodore, who deserted her in favor of an older, wealthier woman.

She finds employment with Madame Aubain shortly after.

Simple, but endowed with a big kind heart, Félicité forms a series of deep attachments over her years of service.

The first was her profound devotion for Virginie. She closely followed and imitated all her religious observances.

She also grew fond of her nephew Victor, a sailor, facing hardships in Dunkirk, ultimately succumbing to yellow fever on his trip to Cuba. She had hardly coped with the devastating news that her beloved Virginie also started showing signs of terrible sickness.

The sickness was followed by an early death and she was completely grief-stricken.

She resigns to her mundane life; years pass one after the other until one day, Madame Aubain receives a parrot from a guest. 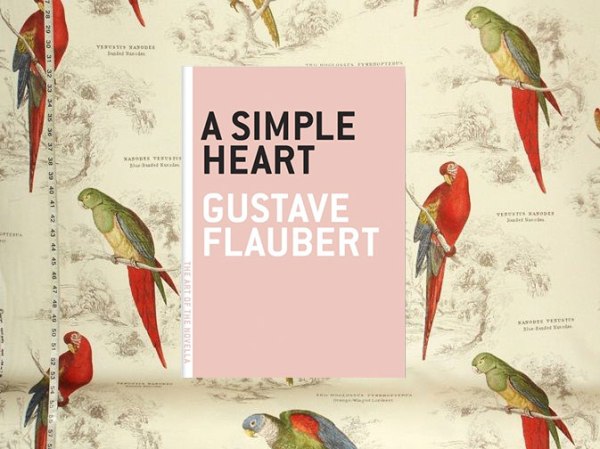 This parrot Loulou now becomes the center of Felicite’s world, who dedicates a significant chunk of her day looking after it, with the same devotion that she had felt for Virginie or Victor initially.

Atlhough, a parrot, Loulou is nothing short of a son to Felicite. She talks to him doing her chores and  simply dotes on him. Upon Loulou’s death, she sends him off to the Taxidermist and continues to keep him alive in her heart.

Quite a few lonely years pass by, interspersed with news of death of people she once knew. Madame Aubain dies and leaves her in possession of a small pension and her house.

There are no interested parties, either to rent or purchase the house, and with passage of time, the condition of the house as well as her health continues to deteriorate.

She donates the stuffed Loulou to the local church and dies shortly after, at a time when a church procession is underway.

In her final moments she envisions a huge parrot hovering over her head, as the heavens part to receive her.

A Simple Heart: Analysis and Review

Gustave Flaubert has been called equal parts romantic and realist and it is plain as day from his portrayal of Felicite, her experiences and the world that she lives in.

He does it so convincingly and with such striking details that you couldn’t help but see her world so vividly, as if you were there and everything was happening in front of your eyes.

“For two nights Félicité never left the dead girl. She said the same prayers over and over again, sprinkled holy water on the sheets, then sat down again to watch. At the end of her first vigil, she noticed that the child’s face had gone yellow, the lips were turning blue, the nose looked sharper, and the eyes were sunken.

She kissed them several times, and would not have been particularly surprised if Virginie had opened them again: to minds like hers the supernatural is a simple matter.

She laid her out, wrapped her in a shroud, put her in her coffin, placed a wreath on her, and spread out her hair. It was fair and amazingly long for her age. Félicité cut off a big lock, half of which she slipped into her bosom, resolving never to part with it.”

Felicite finds it hard to accept the death of her beloved Virginie, but in her mourning, never leaves her side. She displays the same dedication to her as before, with her big kind, yet simple heart.

Her expectation on Virginie opening her eyes when she kissed them and taking a big lock of hers to always keep with her, is of childlike purity. Her simple heart is precisely that – Simple, gives everything it got, to everything she does.

Her simplicity was such a profound message for me. I can’t say that it does not sound cliché, because it does, but to me it was Felicite saying in her humble way- ‘Give it everything you got’.

“Mistress and servant embraced each other, uniting their grief in a kiss which made them equal.” Felicite has been a dedicated servant to the Aubain household for a number of years, and Felicite and Madame Aubain have just been that – mistress and a servant until the death of a beloved kid joins them together in a bond much stronger than that – a bond of love.

Seeing this display of emotion from her mistress, her dedication is more amplified than ever – like that of a dog to its master.

Jose N Harris, an American author, remarked in his book Mi Vida: “Tears shed for another person are a sign of a pure heart.” And drives home the purity of this simple heart.

Flaubert has been known to be a perfectionist. Famously called by Walter Pater as ‘Martyr of Style’. He has been known for his relentless pursuit of ‘le mot juste’ (French for ‘the right word’).

A Simple Heart will tell you why.